These are the 5 Best Carrom games you can play on your android mobile with your friends. All these games are free to download & you can play them on any android device. Carrom is one of the most popular games in India. Peoples like to play it in their free time.

Here are the full details, features of these games, I am also providing download links for each game so that you can easily download it. So, without wasting any time check it out.

5 Best Carrom Games For You Android. 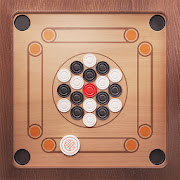 Carrom is an easy-to-play multiplayer board game. Pot all your pieces before your opponent. Can you become the best at this Carrom Board game?
With simple gameplay, smooth controls, and great physics, travel around the world and play against worthy opponents. Are you up for the challenge?
Customize your pieces with a huge variety of unlockable items! Show off your style to players from all over the world!
Features:
►Play multiplayer matches in 2 game modes: Carrom and Disc Pool.
►Play with your friends.
►Compete with top players.
►Try your luck at the free daily golden shot and win big prizes.
►Play around the world in glorious arenas.
► Smooth controls and realistic physics.
►Unlock a wide range of strikers and pucks.
►Win free victory chests with exciting rewards.
►Upgrade your strikers and unleash frenzy.
►Supports offline play.

Challenge your friends in one-on-one matches and show what you are worth! 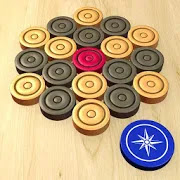 Carrom King™ is a classic board game played between friends, family & kids. Pot coins in the pockets.
Carrom or Karrom, an Indian version of pool or billiards, play the cross-platform easy-to-play multiplayer board game pot all the coins before your opponent win! Carrom King™ features two challenging gameplay modes Freestyle & Black & white.
Carrom King™ is from the creators of Ludo king™, The #1 game of all time! The game that rules the hearts of mobile board gamer’s around the globe!
Same as Ludo King™, Carrom King™ too gives priority to the originality of the game with user-friendly controls, amazing realistic 3D graphics, and great physics giving you all the feel and thrill which you get when you play carrom with your family and friends!
Exciting FEATURES
Multiplayer Game Modes
★ Compete with world players in Online Freestyle & Black & White Mode
★ Join millions of players worldwide
★ Interact with other players by sending emojis and messages
★ Challenge the Opponent again for a rematch
★ Game resume functionality
★ Progress through multiple lobbies all the way to the top
★ Watch your opponent statistics
Play with Friends
★ Connect with your Facebook friends and challenge them online or invite your friends to play in a private room by sharing room code.
Single Player Offline Mode
★ Play Vs Computer and challenge the AI
★ Play Trick Shots a time-bound amazing mode with various levels to challenge your skills. The trick shots mode help you to perfect your carrom moves with some really tricky levels testing your skills and reflexes
★ Play with your family and friends in pass and play mode, This is one of the 5 Best Carrom Games For Smartphones.
Equipment And Rewards
★Start a Carrom King journey with exclusive Frames & Pucks and show off your style.

★Cover Queen to unlock the brand new chest and get rewards. An incomparable takeaway for Carrom fans! 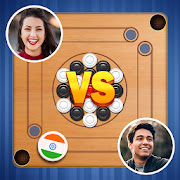 Carrom Royal is a game made by ButcherBox Games
This game builds upon the most popular way Carrom on Android is played.
Carrom is an easy-to-play multiplayer board game. Pot all your pieces before your opponent. Can you become the best at this Carrom Board game?
The game uses easy and very intuitive controls which makes the game very fun to play with.
This is a best carrom multiplayer game ( कैरम बोर्ड गेम ) helps to Play with Friends, Family, Kids, and Strangers across the world in a beautiful carrom game.
Carrom is a popular game in India and now it’s been playing across countries.
In Carrom India region it is called in below names
In Telangana & Andhra Pradesh in Telugu: క్యారమ్,
Tamil Nadu in the Tamil Language: கேரம்,
The Punjabi language is called as ਕੈਰਮ,
Marathi Speaking people spell it: कॅरम,
Malayalam in Kerala: കാരം,
Kannadigas in Karnataka refers to it as ಕ್ಯಾರಂ,
Hindi across India: कैरम,
Gujarati in the State of Gujarat: કેરમ,
In Nepal in their country in Nepali: ক্যারম,
Urdu is widely known as کیرم
न्यू कैरम रॉयल 2020 गेम सबसे अच्छा बोर्ड गेम है। कैरम रॉयल: मल्टीप्लेयर ऑनलाइन, एक कैरम बोर्ड गेम है।
This Carrom game download is free for everyone and works in both offline carrom and online mode game types.
** Game Features **
● Play with players across the world
● Watch the video to earn coins – carrom earn coins & money
● 2 Player Mode – carrom multiplayer game (I.e carrom two players)
● Chat – Easy chat among players.
● Win FREE coins using our Daily Bonus & by watching videos.
● board carrom board game: Single profile mapped with Facebook ID. You will not lose your progress when connected to FB
● Use very little data – works smoothly on 2G, 3G, 4G!
We’ve made sure you get plenty of fun as Carrom Royal Contains:
– Challenges to keep you on your toes: over 1000 unique challenges for an endless potting spree.
– With Computer: Play against the not so smart computer, we’ve made the Computer easy
– Multiplayer: We’ve two types of multiplayer game modes
a). Local Multiplayer: This mode lets you play with another player on the same device

b). Online Multiplayer: Play with players around the world. 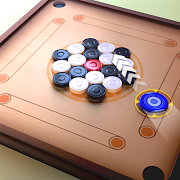 Carrom Board: SuperStar will give you the experience of playing with a real carrom board on your android phone and android tablet.
You can play with the automatic machine (with difficulty levels beginner, intermediate, or expert), or with a friend using the same phone
Carrom game is a strike and pocket game similar to billiards, or pools. Here in carrom (also known as carrom or carom) you will use the finger to shoot the pieces.
Controls are intuitive to any gamer. You will aim and shoot the disk using multi-touch gestures
The game simulates the physics of the carrom accurately.

At the start, you can play with a beginner machine, until you get familiar with the controls. 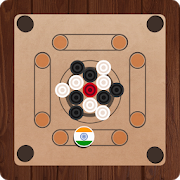 Carrom is very commonly played by families, including children, and at social functions
For those who do not know carrom game more, it is a strike and pocket game similar to billiards, or pools.
Carrom Game For Pool Lover.
carrom is also known as carrom or carom
You can try out any zig-zag shots you used to play on a carrom board.
Striker pieces are used to push the carrom men and the queen across the board to the pockets. In Carrom three colors of pieces ( black, white, and red).
The red disk is called the queen; it is the most valuable piece. During board setup, it is placed at the center of the circle.
Play Carrom In Multiplayer 3D Board Game
When you play carrom your real 3d feel
Carrom is a popular board game originally from South East Asia.
कैरम game is very popular in Afghanistan, Nepal, India, Pakistan, Sri Lanka, Bangladesh
FEATURES:
– Play with the Computer Player.
– Play With Friends.
– Practice Mode.

Conclusion-
So, these are 5 Best carrom games you can play with your friends on your android smartphone. I hope you like this post, Don’t forget to share it with your friends. Thank you. Jai Hind.
Keep Visiting Us Daily.